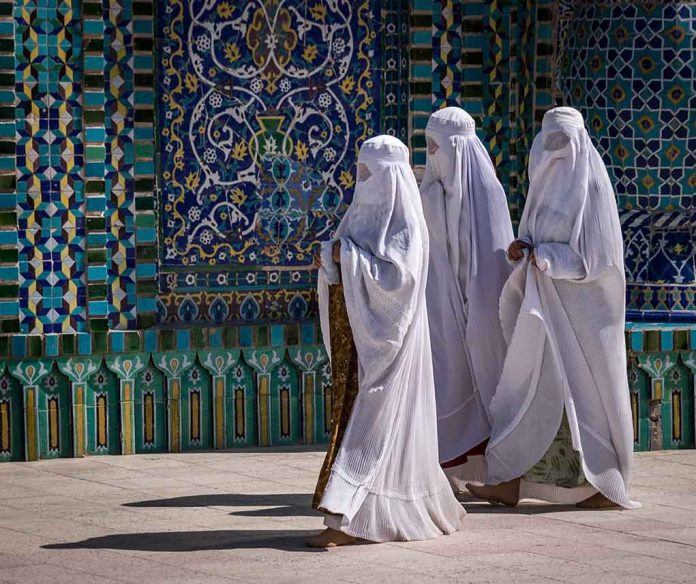 (BrightPress.org) – In August 2021, President Joe Biden pulled American armed forces out of Afghanistan, ending its longest war. The Taliban seized control of the country after the former government fled when the US left. That hurt the war-torn nation significantly, especially women.

While allied forces were present, women came out from the shadows to participate in education, business, and government. Now, the new government is rescinding their rights. The Taliban’s treatment of females is one reason the international community continues to shun Afghanistan, depriving the nation of billions of dollars. That has caused its economy to collapse. Despite the new government’s statements that it’s protecting rights within Sharia law, much of the world says the group’s behavior is unacceptable.

Women In Afghanistan Suffer Under the Taliban

Within hours of seizing control of the Afghan government one year ago, the Taliban said it would allow women to work and study so long as they didn’t violate the Quran. Since then, the terrorist group has banned them from work, education, and lone travel without a male guardian. The rules have largely confined women and girls to their homes. Additionally, they must wear full body coverings in public.

Amnesty International reported those who protested the rules faced severe consequences. The Taliban threatened, arrested, tortured, and detained females. In some cases, the authorities made some girls disappear, never to be heard from again.

Gulestan Safari, a former police officer, told Reuters she loved working in law enforcement before the US military left. She said officers could afford to buy virtually anything they wanted. Since the Taliban takeover, this has all changed.

Things Were Good For 20 Years

When the US defeated the Taliban in 2001, females began to thrive. Most received an education, some started businesses, and all were permitted to contribute to society alongside men. In parliament, 27% of the seats were set aside for women. Under the group’s leadership, there was little healthcare for women, but that changed as the government built over 3,000 healthcare facilities across the country. Child mortality declined, and life expectancy increased from 56 years in 2001 to 66 years by 2017.

Now, families once dependent on the income of female workers are stuck in poverty. As families struggle to purchase groceries, they’ve resorted to selling their young daughters in arranged marriages just to survive.

Politician and activist Azra Jafari served as Afghanistan’s first mayor. She said many journalists, activists, women, and minorities live in fear. She asked the international community not to forget them and said they needed help. The question is, is anyone with power listening?