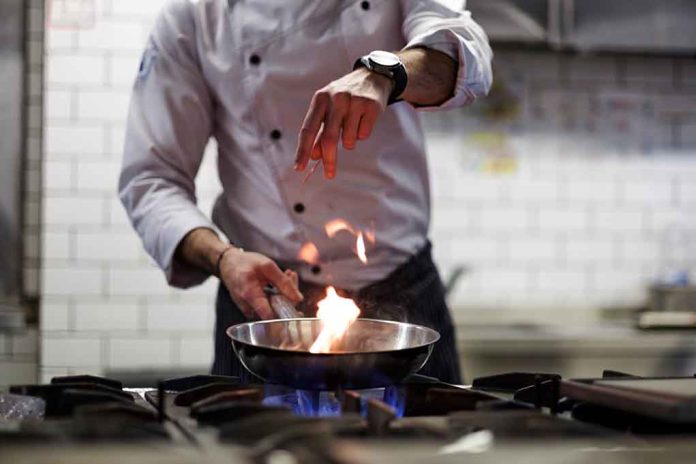 (BrightPress.org) — The Biden administration is mulling over a California report that gas stoves are contributing to human illness and climate change. Stanford University scientist, and co-author of the study, Rob Jackson said “they’re constantly bleeding a little bit of methane into the atmosphere all the time,” even when they’re turned off.

The researchers rented 53 Airbnb units in California and tested their kitchen appliances to see how much gas they leaked when they were not in use. What they found was that almost 3/4s of the emissions occurred when the stoves were not in use.

Calling it a “hidden hazard” Consumer Product Safety Commissioner Richard Trumka Jr implied a ban could be coming for gas stoves. “Products that can’t be made safe can be banned,” he said.

Dr. Jonathan Levy is an environmental professor at Boston University who claimed gas stoves emit dangerous nitrogen dioxide which can cause lung damage. Nitrogen dioxide is a normal product of the combustion reaction which is only a threat if the space is confined or poorly ventilated.

Methane itself has been linked to a host of medical problems, including elevated heart rate and difficulty breathing. It can also trigger asthma attacks and worsen other pulmonary ailments, according to researchers. Benzene is a known carcinogen and is another product of combustion from gas stoves. Researchers are still uncertain if the levels emitted in regular use constitute a cancer risk or not, but prefer to err on the side of mass hysteria as we’ve seen over the last few years.

The CPSC is expected to open public comment on the issue later this year. Enforcement actions could range from outright bans on gas stoves to new requirements for emissions or other measures to make the appliances safer. From electric cars to lowering our ‘carbon footprint’ climate alarmists prefer to target average Americans over corporations like Amazon or our military and their pollution problems.