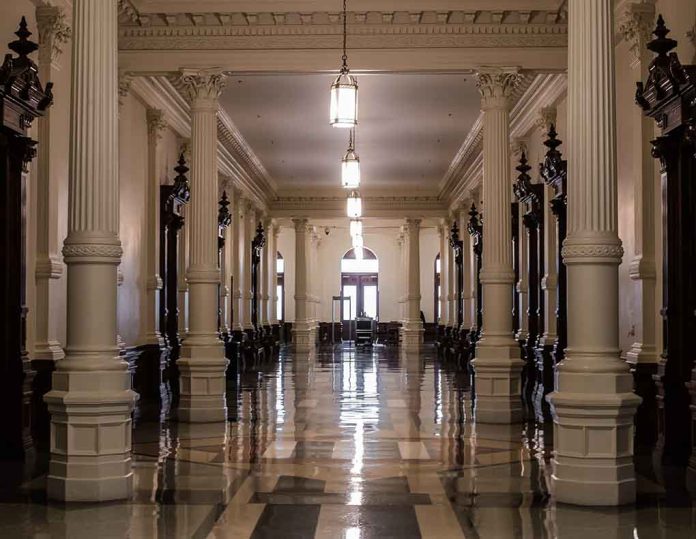 (BrightPress.org) — Democrats are busy making wild accusations that make little sense as new policies and procedures regarding the removal of specific metal detectors seem to have triggered their anxiety that House Republicans, elected members of congress, might unleash a mass shooting in the Capitol.

To be crystal clear, Rep. Eric Swalwell (D-CA) said, “A lot of my Republican colleagues glorify violence and proudly display the firearms they have in their offices,” continuing he said that fact made him “nervous” and called the elected Republicans “not the most stable people.”

Swalwell has been a vocal mouthpiece for the progressive agenda, he was infamously lambasted for his ties to a Chinese national and potential spy, Christine Fang. While he wasn’t indicted or accused of any wrongdoing, Swalwell is mocked for his involvement with her.

The metal detectors in question were installed shortly after January 6th, 2021, and only were for entrances that were used by elected officials and other administrative personnel. The normal security that includes armed guards, metal detectors, and x-ray screening for bags remains in place for visitors and the general public.

House Democrats seemingly cowered in fear conjuring the threat of a Republican-led mass shooting in congress, enacted by one of their own members. Referencing an increase in “political violence” Rep. David Cicilline (D-RI) spoke of the possibility of workplace gun violence at the Capitol.

Rep. Dan Kildee (D-MI) called House Republicans “a frightening group,” citing January 6th as evidence that what was considered crazy before is now possible or likely, including armed combat on the House floor between members. Rep. Jan Schakowsky (D-IL) implied that someone might get heated during a debate and brandish their personal firearm, or worse.

Rep. Adam Schiff (D-CA) said “I try not to think about it.” Further implying that a tragedy was possible now that Republicans could be armed.