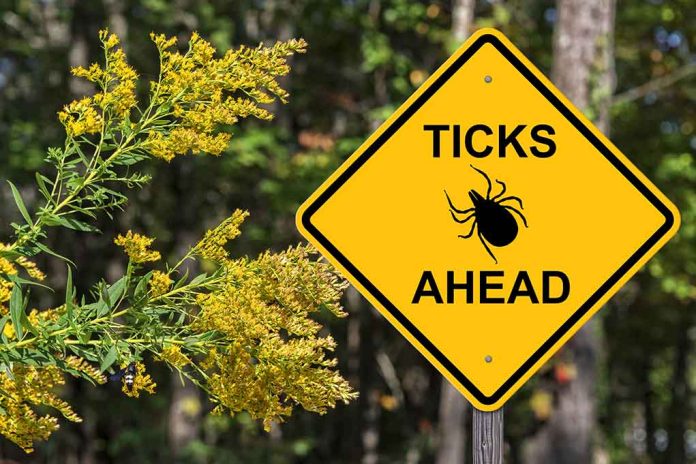 (BrightPress.org) – Tick season is upon us, and with the warmer weather comes a host of new potential dangers. The same species responsible for the spread of Lyme disease, black-legged ticks, could also be carrying a rare but deadly virus. Connecticut has reported its first 2022 case, and other states might also be at risk.

The Connecticut Department of Public Health shared a press release on May 4, informing residents that a local man tested positive for Powassan virus. The patient, who had been aware of a recent tick bite, suffered neurological symptoms that led to his hospitalization. He has since recovered and returned home.

What Is Powassan Virus?

First identified in the United States in 1958, according to the Minnesota Department of Health, the Powassan virus spreads via tick bites. Symptoms usually begin between one week and one month after the bite, often including fever, headaches, vomiting, and weakness.

Some patients also suffer seizures and neurological symptoms stemming from encephalitis (inflammation of the brain) and/or meningitis (which affects tissues that surround the brain and spinal column). These patients have a 1-in-10 chance of dying due to complications. The CDC cautions that some survivors may experience lingering headaches, memory problems, and muscle wasting.

Preventing the Powassan virus and other tick-borne illnesses begins with avoiding the arachnids before they have a chance to bite. Black-legged ticks are most prevalent along the East Coast, but they can appear nearly anywhere in the country. The tiny creatures, which can be as small as a poppy seed, live on bushes and other foliage, where they wait for potential hosts. According to the CDC, people who expect to brush against leaves or grass outdoors can reduce their likelihood of catching uninvited hitchhikers by spraying permethrin on their clothing prior to hiking and applying a DEET-based spray on the skin.

After hiking or other outdoor activities, strip off clothing and immediately wash and tumble dry all articles. Check your entire body for ticks, paying special attention to the underarms, waist, belly button, hair, and anywhere else there are bends or folds in the skin. Make sure to check pets regularly as well and talk to a veterinarian about different prevention options for dogs and cats.

If you do find a tick, use tweezers to slowly, gently remove it. Jerking or twisting will increase the chances of leaving the tick’s head lodged beneath the skin, which poses separate infection risks. The use of petroleum jelly or hot matchsticks can trigger the tick to vomit in panic, increasing the chances of transmitting serious diseases, warns the CDC, so stick to the traditional removal method. Also, never crush the creature with your bare fingers, as it may carry infections you can absorb through your skin.

Increases in the prevalence of diseases like the Powassan virus are making tick season more dangerous than ever. People who are concerned about bites should seek medical care for testing and possible treatment. Keep in mind that ticks can carry multiple infections, which can complicate both prognosis and treatment, so early detection can be vital to a swift and complete recovery.