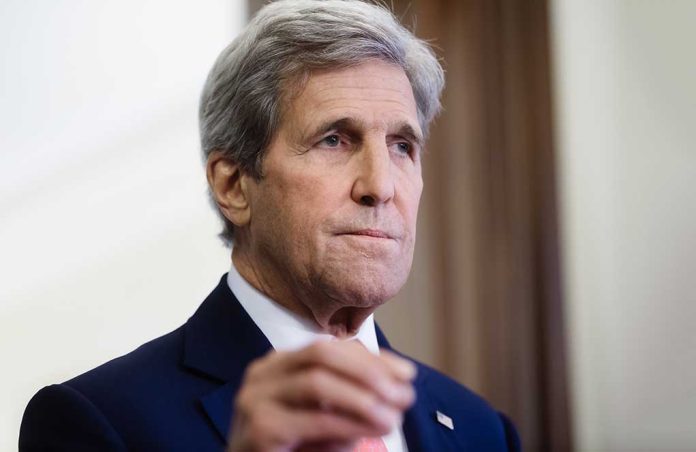 (BrightPress.org) — John Kerry is President Joe Biden’s Special Envoy for Climate. He had harsh words and some wild doomsaying at Davos regarding the now-infamous and yet vital element carbon. Carbon dioxide is a gas we all exhale and which plants require for food. It’s also the product of burning things like coal and natural gas along with water vapor.

Global warming acolytes love to blame ‘excessive’ carbon dioxide from human activity as dangerous for the global climate and likely to cause an extinction-level event if we don’t immediately obey their dire pronouncements.

“I am not convinced we’re going to get there,” Kerry said regarding the need to follow the scientists and achieve a net neutral carbon status as a planetary society. He warned that carbon would contribute to rising global temperatures, repeating the same mantra climate change alarmists have been spouting since the latter half of the twentieth century.

Speaking on net neutral carbon, Kerry said “You and I, we know, they don’t have a clue how they’re going to get there.” He blamed flooding and other natural disasters on climate change while chastising organizations and governments for not meeting their carbon-neutral promises.

The rationale goes that global warming makes natural disasters more frequent and more intense. Evidence for the hypothesis is mostly modeled on computers, a subject that prompted a scandal years ago. Scientists have been caught lying about this data, and the infamous climate gate scandal of 2007 is a forgotten story. Folks are expected to silently oblige the pronouncements from men or women in suits, even when they make wild claims with little evidence to support them.