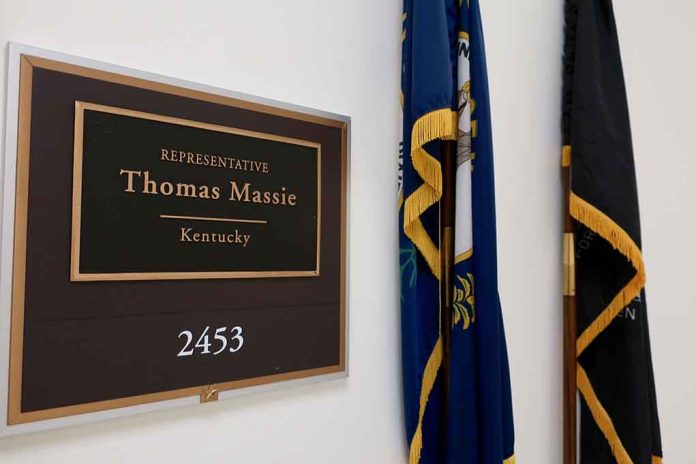 (BrightPress.org) — Rep. Thomas Massie (R-KY) had words for his fellow congressmen and other politicians on Twitter. In his December 28th post, he lambasted his fellow Republicans, Democrats, and the President for approving over $100 billion in taxpayer dollars for Ukraine over the course of 2022.

18 Republicans in the Senate, and nine in the House sided with Democrats to pass the $1.7 trillion omnibus budget package which contained $45 billion for Ukraine in addition to another $1.7 billion promised by the President separately.

Breaking down $100 billion in terms of what that could mean for Americans, “that’s more than $200 million this year from each congressional district.” He asked how that money could have helped each district and what that debt will now mean for the kids growing up there.

One of the few firebrands in the House, Massie is not afraid to buck trends and speak out. While most politicians were clapping like seals for Ukrainian President Volodymyr Zelensky when he came to Washington, DC in December, Massie skipped his speech and had no qualms about explaining why: “American taxpayers have been conscripted into making welfare payments to [Ukraine].”

In May of 2022, Massie expressed concern that “the Military-Industrial Complex doesn’t want to end the Ukraine conflict.”

A peace conference is being tentatively planned for February 2023, however Russian demands for territory and Ukrainian unwillingness to negotiate may perpetuate the war.

Ukraine itself has consistently asked for financial support, and Zelensky’s recent trip to DC clearly paid for itself. They’re asking for missile defense batteries, more tanks, artillery shells, and all the material of war that military contractors love to produce and sell. Weapons of war are big money-makers, after all.

War is a Racket is the title of a famous book by Smedley Butler published in 1935 detailing the curious tendencies of wars to move mountains of cash into private coffers. Rep. Massie would agree.