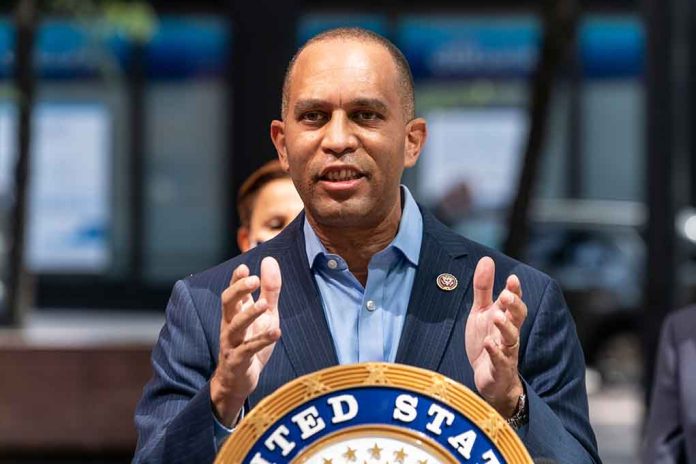 (BrightPress.org) — Rep. Hakeem Jeffries (D-NY) was selected as Minority Leader in the House in the wee hours of Saturday, January 7th as the House completed their fifteenth and final vote for the Speaker, ultimately selecting Kevin McCarthy (R-CA).

Delivering a speech described as “rousing”, Jeffries took pot-shots at his Republican colleagues delivering a series of contrasting commitments in alphabetical order.

Demonstrating their inability to parse humor and cringe, many on the left praise Jeffries in an outpouring of tribal adulation for their new high priest. J6 Committee Chair Bennie G Thompson (D-MS) said, “[the speech] was one of the best I have heard!”

“If you are up, please turn on your tv (@MSNBC) and listen to the leader of the Dem caucus, Hakeem Jeffries,” asked Kamala’s favorite spokesperson and MSNBC host, Symone Sanders-Townsend. Citing his lack of a teleprompter, she called his speech “amazing.” Jeffries had written notes and his speech was not memorized.

Conservatives had a different take. Phil Kerpen, a syndicated conservative columnist called it a “rambling disaster” asking “is the press going to try to sell [this?] or just ignore it?”

“Not the place for you to give a partisan speech,” senior fellow at the Manhattan Institute Brian Riedl critiqued. Author and Republican Party activist Ryan James Girdusky said, “I would rather listen to George Santos read his Wikipedia page over Jeffries giving this speech.”

I'm sure CNN and MSNBC loved every word out of Hakeem Jeffries's mouth, but idk about the rest of the country.