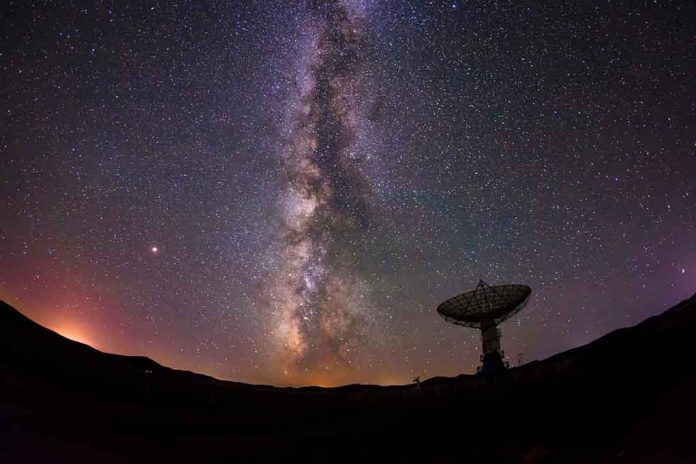 (BrightPress.org) – Since the dawn of time, many have wondered if there is life beyond Earth. Over the last 70 years, astronomers have scanned for radio signals and visual clues to find an answer. Scientists say over 300 million worlds within the Milky Way galaxy could inhabit life. Perhaps there’s a chance some extraterrestrial beings are intelligent and have developed technology.

In a galaxy far, far away…

On July 12, Nature Journal published research from the Massachusetts Institute of Technology (MIT) and Canadian astronomers about the discovery of a radio signal that could be emanating from another galaxy deep in space. Scientists believe the fast radio burst (FRB) came from several billion lightyears away. Members of the Canadian Hydrogen Intensity Mapping Experiment (CHIME)/FRB Collaboration at the Dominion Radio Astrophysical Observatory in British Columbia picked up the noise. Researchers believe it could be coming from a neutron star.

CHIME is a telescope that detects hydrogen-generated radio waves created when the universe formed. Scientists report that the listening device has heard hundreds of FRBs. That is an intense, strong flash of radio waves that typically lasts only a few milliseconds. The latest one lasted for three seconds, making it the longest ever recorded.

Even more puzzling to astronomers is the fact the radio wave bursts keep repeating every 200 milliseconds. The experts have reported it sounded like a heartbeat rhythm and is the clearest pattern ever heard from space.

Scientists claim that of the many FRBs they’ve seen, they’ve never come across one like this before. Engineers are working on future telescopes that astronomers believe will help them hear thousands of FRBs every month.