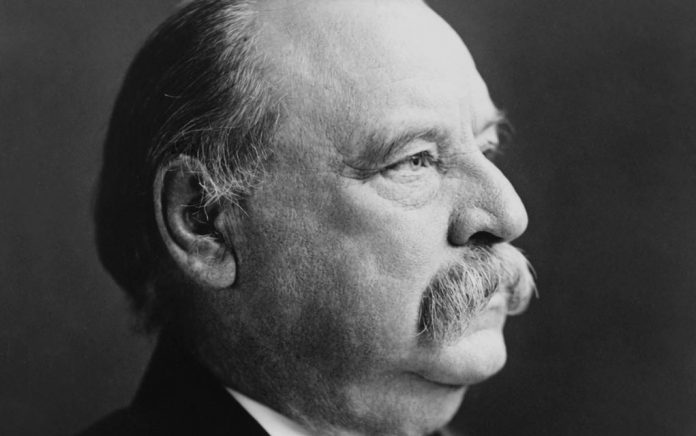 (BrightPress.org) – It seems that every president has some sort of legacy; each is unique and has different experiences during their term. However, only one president has ever served two terms that were not back to back. Let’s take a look at the presidency of Grover Cleveland.

Born March 18, 1837, Stephen Grover Cleveland grew into quite an intimidating character. Cleveland stood at almost 6 feet tall and weighed nearly 300 pounds. In addition to his physical size, he was often seen as a bulldog, earning him the name “Ugly Honest.” He served as the county sheriff in Erie County, NY between 1871 and 1874. He also served as the mayor of Buffalo, NY in 1881 and eventually as the state governor of New York from 1882-1885.

In 1884, Grover Cleveland became the first Democratic president to be elected since the end of the Civil War. He was stern and stood for what he believed in, vetoing many private bills. Cleveland, in 1887, angered many voters when he vetoed the Dependent Pension Bill of 1887, a bill that would have granted disability pensions outside military service.

In an effort to stave off weakness in our nation and government reliance, Cleveland also vetoed a bill that would appropriate $10,000 for seed-distribution to Texas, which was suffering from a severe drought. Not even the railroads could intimidate Cleveland as he forced them to return 81 million acres of the western lands held through a government grant. He also signed the Interstate Commerce Act, which was the first federal law to regulate the railroads.

When confronted with his role in giving Republican candidates something to build off of for the next election, Cleveland simply replied, “What is the use of being elected or reelected unless you stand for something?” Cleveland was defeated by Indiana Republican Benjamin Harrison in 1888.

After his defeat in the 1888 presidential election, Cleveland and his wife moved to New York to lead a private life and pursue a business opportunity. However, during her farewell, Mrs. Cleveland interrupted a sad Jerry Smith, who had worked for the White House since his days as a stable boy for Ulysses S. Grant.

She simply asked Jerry to take care of all the furniture and ornaments in the White House, ensuring they were the same when she and Cleveland returned. Of course, Smith was astonished and asked the First Lady when she planned to return.

Mrs. Cleveland simply stated, “We are coming back just 4 years from to-day.” As we know, Mrs. Cleveland was correct in her prediction as Grover was again inaugurated March 4th, 1893.

When he was elected again in 1892, Cleveland was faced with a minor depression. However, instead of dealing with farm mortgage foreclosures, failed businesses and unemployment, Cleveland dealt directly with the US Treasury crisis. He was able to repeal the Sherman Silver Purchase Act and, with the aid of Wall Street, was able to maintain the Treasury’s gold reserve.

An injunction was violated by railroad strikers in the city of Chicago, in which Cleveland sent federal troops to deal with the discord. He stated that if the entire US military were needed to deliver a postcard, that postcard would be delivered.

The hard-hitting treatment of these railroad strikers, along with his aggressive way of forcing Great Britain to accept negotiations over the disputed border within Venezuela, ignited the pride of Americans.

In 1896, the Democratic party abandoned Grover Cleveland for William Jennings Brian, as Cleveland’s policies during the depression were widely unpopular. Cleveland died in 1908 after retiring in Princeton, NY.