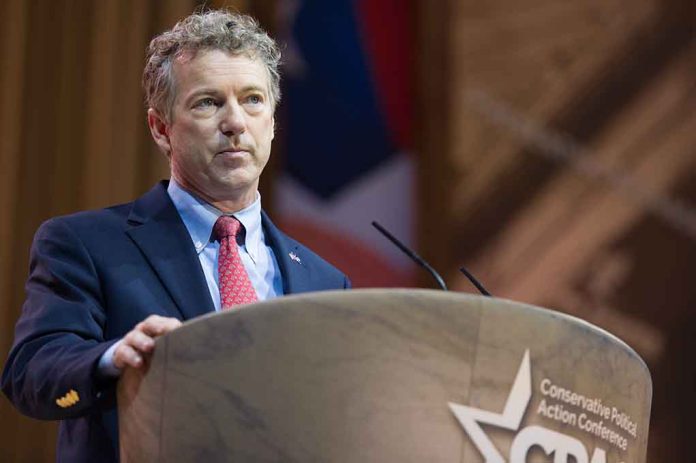 (BrightPress.org) — Senator Rand Paul (R-KY) is the only penny-pincher in congress willing to call out excesses of the federal government. The week before Christmas has been a busy time in Washington as Congress attempts to pass and finalize the $1.7 trillion budget for 2023.

Paul has borrowed the Festivus holiday from “Seinfeld” which featured an airing of grievances. The federal debt has skyrocketed in recent years over pandemic-era policies and a willingness among Democrats and many Republicans to spend trillions of dollars we don’t have.

“Who’s to blame?” Paul asked. Continuing, he lamented the $3.5 trillion spent on the Inflation Reduction Act pointing out it doesn’t actually combat inflation. His report pointed to the $475 billion paid solely on the interest accrued by the national debt, nearly $2 billion spent to maintain empty federal buildings, as well as smaller items like a $200,000 espresso machine purchased by the Department of Defense from Starbucks.

“At least Americans can rest assured that our military personnel will be perky and energetic,” Paul quipped. Further suggesting that the military already wastes insane amounts of taxpayer funds on unnecessary overseas military adventures.

Other curious items pointed out by Paul include $168 million to The Vera Institute of Justice to help illegal immigrants avoid deportation. He mentioned that this group has received over $1.1 billion since 2008 in federal funds. Why are we paying to help keep illegal immigrants here while also paying to deport them back to their home countries?

The government also spent $3 million in scientific grants aimed at determining if steroids contribute to aggression by injecting them into hamsters and watching them fight. Didn’t we already know that to be the case? That’s not all the weird science, there was also $2.3 million to inject beagle puppies with cocaine and $1.1 million to get mice drunk.

The 2023 $1.7 billion budget has passed the Senate and is expected to pass in the House Friday, the 23rd of December.